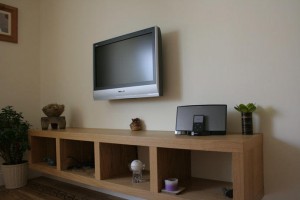 Whichever way you choose to place your valued possession, the height is an important consideration. The ideal height should be where your eyes level with the middle of the television screen. This height gives a correct viewing angle. Your television can either be placed on a stand or wall mounted.

There are many sleek looking decorative stands available in the market. One can choose a proper colour and model according to the background decor. Size and weight of the television are also important factors while purchasing the stand.  A television should not be placed close to the front edge of the stand as they are heavier from the front.

Flat panel televisions can also be wall mounted. Floor space is saved considerably in this case. But the television can’t be moved often from its current place. Wall mounted televisions require holes in the walls for electrical outlet and AV cables. Shifting television at some other place requires closing of the previous holes in the wall and making new ones. Many people prefer hanging their flat panels above the fireplace. Precaution should then be taken that the residual heat does not affect television. The height should also be kept in mind as placing the television at a higher height is strenuous for the neck.

Aesthetics should be given importance while deciding the right place for your television. Whichever way you choose to place your television it can always add to the existing home decor.